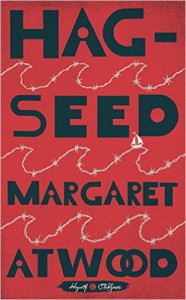 Felix, the eccentric Artistic Director of the Makeshiweg Festival, is getting ready to present his interpretation of Shakespeare's The Tempest, but is removed from his position thanks to the underhanded methods of his assistant, Tony. After going off the grid for a while, Felix takes a job teaching a course at Fletcher County Correctional Institute, where he teachers Shakespeare to a small group of inmates. After a few years, an opportunity presents itself for Felix to get revenge on Tony and the others who did him wrong.

This is the first of the Hogarth Shakespeare retellings that I've read so far. I decided to re-read The Tempest before starting this book, and I'm glad I did - it had been a while since I had read it, and I had forgotten a lot of the story. I don't think that it's necessary to read The Tempest before reading Hag-Seed, but it does help. [For anyone not able to read the play first, there is a summary of The Tempest at the end of the book, so I would actually recommend skipping ahead to that before starting the novel.]

I wasn't sure at first how I was going to like this book - I thought it an odd choice having the actual play The Tempest as part of the plot in a book that's supposed to be based on the play (a little too obvious), but it really worked well. Sort of like how Hamlet uses a play within a play to act out scenes that are happening in the "real world" of the story. It also helped that Felix was more or less aware that his current situation resembled the play - if he had been oblivious to that fact, it would have just been weird. Sure there were parts that played out a little too theatrically - his revenge was way too neat and tidy - and if this had been anything other than a retelling it would have bothered me. But Shakespeare's plays had the same neat and tidy endings, so it worked.

The biggest thing that surprised me was how Atwood was able to take a play made up with mostly unlikable characters and make a compelling story out of it. The only characters I liked at all were the prisoners. The antagonists - Tony and the others - were supposed to be unlikable, but Felix wasn't really very easy to like. His delusion about Miranda made him hard to identify with, and his quest for revenge made him - at least to me - pretty unlikable. However, I think that this was sort of the point. I think that Atwood went into this book knowing that the prisoners would be the most likable and relatable characters, and this is why the book is called "Hag-Seed", as a direct reference to Caliban. I think it was an interesting choice on her part, and it was probably the best way to pull it off.

You definitely need to be able to read books centered around unlikable characters in order to enjoy this one, but otherwise I think it's a pretty interesting book and an enjoyable read, even if you're not familiar with the play.