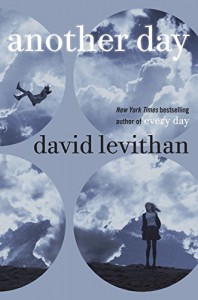 This story is the book Every Day re-told from the point of view of Rhiannon. As Levithan states in the forward, you can read it as a stand-alone, but I think that a reader will get more out of it after reading Every Day first. But that's just personal opinion.

I'm having a hard time deciding what to feel about this book. Because for most of the book, I absolutely loved it. This was the book that I wanted Every Day to be. It was Every Day, but with a protagonist that I didn't want to punch in the face. There are a lot of duplicate sections - the parts of the book where they were together had word-for-word dialogue from the first book, but thoughts and impressions from Rhiannon instead of A. The rest of the book was Rhiannon dealing with finding out who A was and what to do about their relationship. And as much as I adored Rhiannon in the first book, that was just multiplied here. I think she's a wonderful character and, more importantly, a very real character. She handled the situation in a way that I believe a real, normal high schooler would have. It bothered A that Rhiannon couldn't get past the bodies to see who he was on the inside, but what sixteen- or seventeen-year-old could? She tries, but the fact is that people are attracted to a person's outside as well as who they are on the inside. And I thought that her coming to terms with this - and trying to get past it and failing - made her very real to me.

My only problem... I hated the ending! I'm not going to give away anything. I still think it's a book worth reading, so I don't want to spoil it for anyone who wants to pick it up, but I found the ending so extremely disappointing. And not even the final chapter... I was with it right up until the final page. And then the way that Levithan chose to end that final page just pissed me off. I feel like he's setting it up for a sequel, but I don't want a sequel. I wanted it to end there. Because, as I mentioned in my review of Every Day, I feel like a sequel to the story of A and Rhiannon can be nothing but depressing.

But what do I know? I'm just the reader.

I'd be curious to know what other readers think about this book. Both from the point of view of someone who has read Every Day and from the point of view of someone who hasn't. I do think this book is worth reading. I mostly completely loved it. I just can't get past the way it ended. I wish I could, but I can't. And the thing is, if he writes a sequel, I'm sure I would read it, simply out of curiosity. But I wouldn't have high hopes of a happy ending.

Thank you to the author and the publisher for an advanced copy from NetGalley.