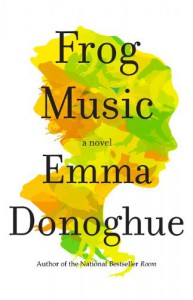 During the summer of 1876, San Francisco is experiencing a record-breaking heatwave, as well as an epidemic of smallpox. French burlesque dancer and high-class prostitute, Blanche Beunon is minding her own business when she is run into by a young woman - dressed like a man, in slacks and short hair - on a bicycle. Her chance encounter with Jenny Bonnet sets off a chain of events that ends in Jenny getting shot to death, the bullets just missing Blanche. Blanche thinks she knows who's responsible, but proving it is another matter.

Based on the true unsolved murder of Jenny Bonnet and on real people and events of the time.

I really liked the story that Donoghue chose to tell here. She states in her "Afterword" that this is a complete work of fiction - she's not trying to solve a murder, just tell a story. But I thought that her story of who killed Jenny was both well-told and plausible, based on the story Donoghue chose to tell. I also feel that whether or not this is the way that it actually happened is irrelevant. Donoghue took statements from public record - Jenny's murder, her tendency to wear men's clothing, the fact that Blanche was with Jenny when she died, and Blanche's statement blaming her former lover for the murder are all on public record from the inquest into Jennie's death. The rest, as Donoghue herself notes, is a work of fiction, based on those facts on on other facts about the characters that she was able to dig up (such as Blanche's dancing and her relationship with Arthur.)

This was an era that I hadn't heard much about previously, so it was one that I enjoyed reading about. Between the end of the Gold Rush and the 1906 San Francisco earthquake that leveled the city, San Francisco was booming and had a high immigrant population. Most of this story takes place in Chinatown, specifically, so we get a good impression about American's racial attitudes toward both the Chinese and the French (the nationality of the main characters). I also had heard about both the smallpox epidemic and how the heatwave played into how easily it spread, but it was interesting to read from the point of view of characters in a novel, rather than from a history text. In addition, Donoghue didn't shy away from the seedier aspects of the city at the time - not only did she tell the story from the point of view of a burlesque dancer, giving the reader a view of that world, but we were also given a glimpse of two cringe-worthy practices at the time: Institutions for "Troubled Youths" and establishments that were known as "baby farms".

Obviously, this was not an easy book to read at times. In addition to the sometimes troubling subject matter, there were very few likable characters in the story. The main character, Blanche, was actually pretty loathsome a lot of the time. Even Jenny, who was probably - by far - the most likable character and she had a few moments that really made me kind of hate her. [Jenny was a hard character to read, though, intentionally - the character of Jenny that we read in flashbacks keeps a lot of secrets, and when those secrets come out after her death, they do a lot to change the reader's impression of her, for better or worse.] I've read quite a few books lately with unlikable characters - [Why is that? I need to stop this trend.] - and I have to say this was one of the better ones, because while the characters were unlikable, at least they were interesting.

This book wasn't perfect. Some parts were hard to get through - sometimes because of tough content, but sometimes because they were just slow - and the characters were mostly horrible people. But it was a well-written book and told an interesting story during an interesting time period that I don't get a chance to read much about - especially not from this particular ethnic point of view; most West Coast immigrant stories I've read take a Chinese main character. An interesting story, but you have to be willing to read about the seedy underbelly of the time, which isn't for everyone.