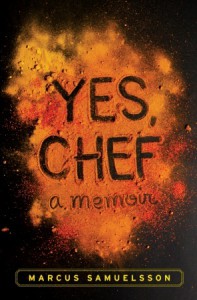 Award-winning chef Marcus Samuelsson tells about how he went from being an Ethiopian orphan raised by adoptive parents in Sweden to a opening his own restaurant in New York.

I enjoy reading books about the food world. As someone who is only a so-so cook herself, I find it fascinating to read about (or watch on Food Network) how the mind of a chef works. I also understand now - after reading this book - that a chef has to really love what they do in order to get to the point where they're running the kitchen at a high-end restaurant. Talent isn't enough. A chef has to be able to do their time in the trenches, put up with militant bosses who could fire them for the tiniest mistake, working long hours for little pay. Not very glamorous at all.

Samuelsson is not a name that I was particularly familiar with - my knowledge of celebrity chefs is honestly limited to Iron Chef and a few Food Network cooking shows - but it was very interesting to me to learn about him and where he came from. I also found it fascinating that - even today - restaurant kitchens are very much a place for white males. Samuelsson makes this clear by telling his story and by telling the reader the little things that he is doing at his restaurant to try and change this dynamic, but in a way that doesn't seem like he's making his book about race. He happens to be a black chef, which is difficult in today's world, but his book is more about trying to incorporate his heritage into his cooking (both his Swedish and his Ethiopian heritage) than it is about condemning the cooking world for racism.

What I really enjoyed about this memoir, though, is that Samuelsson really has lived an interesting life, even outside of being a chef. To go from a sick, hungry child in Ethiopia, to being adopted by loving parents in Sweden, to traveling all over the world, to cooking at the White House, his story really is quite remarkable. And I liked how he didn't gloss over his failures - both in the kitchen and in life. He wrote openly about everything, from his failed restaurant, from the daughter he abandoned in Austria after a one-night stand. (He eventually connected with her, when she was fourteen.)

Overall a very interesting book about life in the restaurant business and a fascinating story about one man who overcame tremendous odds to become successful in that world. Recommended to anyone who likes memoirs or Food Network.