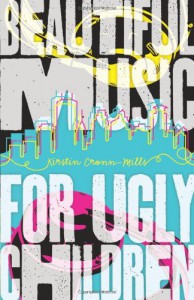 Gabe Williams just got his dream job – a radio DJ gig. Sure, it’s Friday nights at midnight and it’s on a local community radio station, so probably no one will listen, but it’s a start. What Gabe really wants is to move to the Cities after he graduates in a few months, get a place of his own, a radio job, and a chance to start his life over where nobody knows who he is. Because everybody in his town knows him as Elizabeth. Gabe was born a girl, but has known since he was a child that he was really a boy. He recently revealed this fact to his best friend and his family, to mixed results. But on the radio, he is a voice, so no one has to know who he is. He can just be Gabe. But once his secret gets out, will his fans still accept him?

This is a great look into what it’s like being a transgender individual. Told from Gabe’s point of view, the reader gets to see things how Gabe sees things. He’s not a girl dressing up and pretending to be a boy. He’s a boy who was born into the wrong body. I thought that the character of Gabe was extremely well-written. He has all the fears and insecurities that any one in this situation would surely have, but at the same time he seems like a typical teenager with dreams of a future after high school graduation.

I loved the author’s choice to tell Gabe’s story through his radio show music. His music obsession gave him a lot of character as well as allowing us to see a lot of the “real” Gabe that he was allowed to be on his radio show. I also thought that his relationship with his music mentor, John, was amazing, and honestly much more interesting than his relationship with his best friend, Paige.

Overall, I thought that this was a great story, and very realistic, showing all of the hardships a teen would face when trying to transition, including hate and violence, but also love and acceptance. I would strongly recommend this book to all teenage readers, but especially those in the LGBT community who might be struggling with their identities and coming out to friends and family.