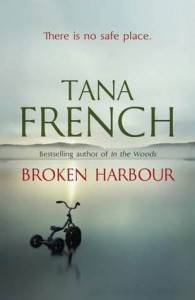 In a half-built, half-abandoned estate known as Broken Harbor, two children and their father are found dead. The children appear to have been smothered, while the father was stabbed multiple times. The mother, also suffering from multiple stab wounds, is still clinging to life and is rushed to the hospital. “Scorcher” Kennedy, the Murder Squad’s star detective, along with his rookie partner, is given the case. At first it looks like a simple murder-suicide case, where the father – having lost his job, and about to lose everything else – turned on his family before killing himself. But as new clues come to light, the case becomes much more complicated. Scorcher needs a quick win on this one, but before it’s all over, this case might just be the one that tears his career – and his life – apart.

Like the other books in the “Dublin Murder Squad” series, this book takes a minor character from a previous book and places him or her front and center. Scorcher appeared in the third book in the series, Faithful Place… and I really didn’t like him. When I saw that he was taking the lead in this new book, I was disappointed. Fortunately, it turned out to be a case of exceeded expectations. In Faithful Place, the lead character didn’t like Scorcher, so he was played off as being a very unlikable character himself. But in this one, where we were able to get his back story and his perspective, he actually ended up being one of my favorite POV characters from the series.

While I didn’t find the “whodunnit” to be as mysterious as some of the others – I guessed pretty early on – I still didn’t see most of the twists and turns coming. French did a really good job here of setting up a mood to the mystery – the mystery wasn’t as simple as “who killed them”, but was rather overlapped with the mystery of whether or not the father was going insane before the murders occurred. I’ll admit that I found that particular mystery even more compelling than the murders.

I still think that the earlier books in the series were the best – I’m a bit partial to the first book (In the Woods), with The Likeness a close second (and I know a lot of people think The Likeness was her best book so far). But I’ve found the next few books to be good mystery stories as well. I’ll definitely be picking up The Secret Place soon (#5). Even if the remaining books can’t stand up to the early work, they’re still wonderfully entertaining.