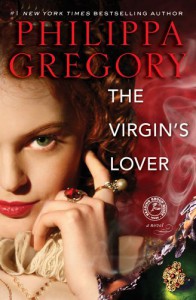 The Virgin’s Lover (The Tudor Court #5)

In her first days on the throne, Queen Elizabeth faces threats from many sides: the Pope, outraged by the new Protestant Queen, has declared it not a sin to assassinate her, and Mary, Queen of Scots, along with the French army, threaten an invasion of England if they are able to complete a takeover of Scotland. Meanwhile, Elizabeth has only two men she can trust – her counselor William Cecil, and her long-time friend Robert Dudley. But when her relationship with the married Dudley leads to a passionate affair, Elizabeth finds her enemies multiplying and her allies dwindling.

The synopsis for this book is a little misleading, because while it’s very much about Elizabeth’s first years on the throne and her possible war with France, the main character of this story is Robert Dudley and his passion for both Elizabeth and for power. We also learn a lot about Amy – Dudley’s cast-aside wife.

This book has a lot going for it: an interesting time in history, the early years of Elizabeth I’s reign, the intricacies of the spy networks in England at this time, plus I find it always fun to read about the Tudors. I think that Philippa Gregory does a great job of writing the characters and the time period, and I find her books to be well-written and an interesting combination of history and rumor.

However, this book also has one big thing going against it: absolutely NO likable characters. The character I liked the most was undoubtedly William Cecil, but he was a side character to the whole story. Dudley was power hungry and a horrible person. Elizabeth was kind of a whiny bitch (I’m sorry, but it’s true, and this is coming from someone who loves Elizabeth I). Even Amy, who we were supposed to be sympathetic to, was at times really hard to find sympathy for. I get that this is what these characters were really like, and I think that Gregory did a good job of writing them, it’s just hard to read a book when you hate all of the characters.

That being said, it was still a relatively enjoyable book. As mentioned before, it’s a really interesting time period, and I thought the method of Amy’s mysterious death that Gregory chose to write about was a good choice. Recommended, but really only for hard-core historical fiction lovers.